Corporate news transmitted by euro adhoc. The issuer/originator is solely responsible for the content of this announcement.

In the evening of 23 November 2016 (local time), a fire broke out in the Malaysian production site of examination and protective gloves (Latexx Partners). For safety reasons the operation of several adjacent production sites was stopped and the sites were evacuated. The fire was extinguished within a few hours and nobody was hurt.

The fire damage affects the main storage for formers used for the glove production and the mechanical workshop, which are located next to one of the seven production buildings on the factory premises. At present, experts are investigating the cause of the fire as well as the amount of property damage. An insurance exists for the property damage and the costs of the business interruption.

All production lines at the site, with the exception of one production area that is located right next to the source of fire, have restarted operation and supplies are continued.

About Semperit The publicly listed company Semperit AG Holding is an internationally-oriented group that develops, produces, and sells highly specialised rubber and plastic products in more than 100 countries for the medical and industrial sectors: examination and surgical gloves, hydraulic and industrial hoses, conveyor belts, escalator handrails, construction profiles, cable car rings, and products for railway superstructures. The headquarters of this traditional Austrian company, which was founded in 1824, are located in Vienna. The Semperit Group employs more than 7,000 people worldwide, including close to 4,100 in Asia and more than 800 in Austria (Vienna and production site in Wimpassing, Lower Austria). The group has 22 manufacturing facilities worldwide and numerous sales offices in Europe, Asia, America and Australia. In 2015, the group generated sales of EUR 915 million and EBITDA of EUR 96 million. 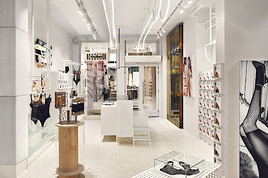