Corporate news transmitted by euro adhoc. The issuer/originator is solely responsible for the content of this announcement.

Luxembourg-based Forum Invest S.a.r.l has commissioned Ed. Züblin AG, the market leader in building construction and civil engineering in Germany, to build the new East Side Mall in Berlin. Forum Invest is represented by Berlin-based project development company FREO Financial & Real Estate Operations GmbH. The contract for the new construction, to be carried out under STRABAG’s teamconcept partnering scheme, has a value of about EUR 84,3 million including construction design. The architectural design was conceived by Dutch architecture office UNStudio, which also designed the Züblin-built Mercedes-Benz Museum in Stuttgart.

Thomas Birtel, CEO of STRABAG SE points to the increased interest in early partnering already during the design phase: “More and more clients are opting to work with us under the STRABAG teamconcept partnering model, both in the design phase as well as during actual construction. This bears witness to the competitiveness and sustainability of the teamconcept. It helps realise projects with higher on-time delivery and on-budget completion.”

The East Side Mall shopping centre is being built in a central location in Berlin’s Friedrichshain district near the East Side Gallery memorial. Completion is scheduled for the autumn of 2018. Ground preparations and piling, also being carried out by Züblin, began in June 2016. The three-storey building will offer approx. 37,800 m2 of lettable space for retail, services, gastronomy and events. The shopping centre’s façade is visually structured into separate coloured, wavelike segments. In addition to transparent glass elements, the façade also consists of sandwich panels with variously tilted and projecting slats. Above the three shopping centre floors, a further two levels will offer around 760 parking spaces.

The project stretches about 190 m from east to west and about 110 m from north to south. An approx. 50 m long platform will link the shopping centre directly to the Warschauer Straße public transport stations.

Züblin contributed its know-how during design phase The contract signing for the new construction was preceded by an approx. 15- month design phase. Under the terms of the teamconcept (phase 1), Züblin assisted FREO at this stage with the final design and in the building permission application. Both sides benefited from the know-how and expertise of the other partner.

The services provided by Züblin during the design phase included: 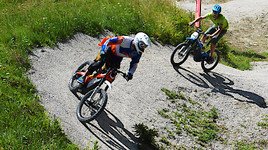