EANS-News: voestalpine achieves its best quarterly results since the onset of the financial crisis*

Corporate news transmitted by euro adhoc with the aim of a Europe-wide distribution. The issuer is responsible for the content of this announcement.

Linz – In an economic environment, which was characterized by positive growth in Europe and Asia as well as a moderate upward trend in North America, which was however accompanied by considerable uncertainties, voestalpine achieved new peak levels of its operational earnings in the first quarter of the business year 2017/18 since the onset of the financial crisis:*

With this development, voestalpine Group was able to level up its earnings in a solid, but not exceptional economic environment to a level yet only seen in the extraordinary boom period before “Lehman”, by successfully implementing its high-tech / high-quality growth strategy globally.

The positive development in the first quarter of the business year 2017/18 was based on unchanged strong demand for products, components and systems made of steel and other metals in the strategic core segments automotive and aviation industry but also in the consumer goods and mechanical engineering industries, whereas the oil and gas segment, despite some improvement, was still confronted with a restrained pricing environment. Investments in railway infrastructure differed globally substantially.

In terms of earnings, following the excellent first quarter we expect the second quarter to be characterized by continued strong demand as well as by seasonal effects (production cutbacks due to regular summer plant closures). Individual industries traditionally try to put pressure on the margins during this period even though demand remains solid. Contrary to the summer months in years past, this should not have a fundamental effect on the positive earnings in the first six months of 2017/18, given the current market environment which is seeing substantial growth, but it does not allow for reliable forecasts on the development of the year’s second half before the end of the second quarter-especially with respect to the ongoing volatility of raw materials prices. Irrespective thereof, based on the figures for the first quarter the substantially positive development in both revenue and earnings that is expected for the business year 2017/18 compared to the previous year seems to be secure.

*) On clean basis: Excluding non-recurring items from changes of consolidation in the first quarter of the business year 2015/16. 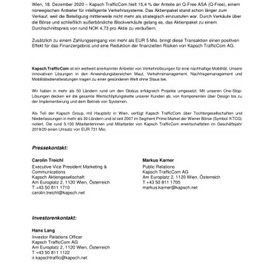