Effective 1 January 2023, the publicly listed construction technology
group STRABAG will be led by a new CEO, as Klemens Haselsteiner succeeds
Thomas Birtel, who will be stepping down as CEO after ten years at the
helm upon reaching the specified age limit. Haselsteiner has been on the
Management Board since 2020, where he set up and established the
Digitalisation, Corporate Development and Innovation portfolio. Before
that, he had worked for the group in Russia and in Germany, where he held
a leading position in the Stuttgart subdivision, first as commercial
business unit manager and later as subdivision manager. As Chief Digital
Officer, his focus was on the definition and implementation of a
corporate-wide digitalisation and sustainability strategy, in addition to
overseeing pilot projects such as the first construction site deployment
of the robot dog Spot. “Assuming corporate responsibility is part of my
DNA, so to speak. Our company has a long-term outlook, so we must not only
think about today or tomorrow, but also about the day after tomorrow. My
vision is to create a resilient, sustainable and innovative STRABAG,” says
Klemens Haselsteiner.

“Klemens Haselsteiner has learned the construction business from the
ground up, holding various positions within the group while formulating a
clear strategic vision for the company. From the Supervisory Board’s point
of view, he exactly fulfils the profile required for the CEO of an
internationally successful, publicly listed corporation. On behalf of the
Supervisory Board, I would like to thank Thomas Birtel for his outstanding
work. With his clear focus on risk management, he has made a significant
contribution to improving profitability,” says Alfred Gusenbauer, Chairman
of the Supervisory Board of STRABAG SE.

New on the Management Board: Jörg Rösler
Klemens Haselsteiner will continue to be in charge of innovation and
digitalisation in his capacity as CEO. As a result, the Management Board
will again consist of five people in the future. There will be some
changes in the operating segments: Alfred Watzl, currently in charge of
the North + West segment, will take over the segment South + East from
Peter Krammer. Peter Krammer will not be extending his Management Board
mandate and will leave the group at the end of the year. This change is
accompanied by the reclassification of Poland, the third largest market of
STRABAG SE, into the South + East segment. The North + West segment, which
includes the largest market by far, Germany, as well as Benelux and
Scandinavia, will be expanded to include Switzerland and will in the
future be led by Jörg Rösler (58). Rösler started his professional career
in 1988 as a construction manager. He joined the group in 2001 and has
been on the Management Board of German subsidiary STRABAG AG since 2011.
The segment International + Special Divisions will continue to be headed
by Siegfried Wanker. Christian Harder has been confirmed in his position
as Chief Financial Officer.

STRABAG SE is a European-based technology partner for construction
services, a leader in innovation and financial strength. Our services span
all areas of the construction industry and cover the entire construction
value chain. We create added value for our clients by our specialised
entities integrating the most diverse services and assuming responsibility
for them. We bring together people, materials and machinery at the right
place and at the right time in order to realise even complex construction
projects – on schedule, of the highest quality and at the best price. The
hard work and dedication of our approximately 74,000 employees allow us to
generate an annual output volume of around € 16 billion. At the same time,
a dense network of numerous subsidiaries in many European countries and on
other continents is helping to expand our area of operation far beyond the
borders of Austria and Germany. More information is available at
www.strabag.com. 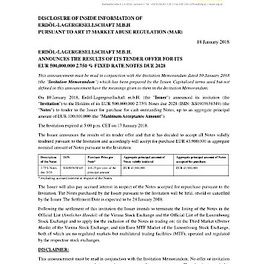 EANS-Adhoc: Erdöl-Lagergesellschaft m.b.H. / Announces the results of its tender offer for its outstanding Notes (ISIN: XS0905658349)